The Indianapolis Colts will fight for their lives in this week’s Monday Night Football when they travel to MetLife Stadium to face the New York Jets.

Quarterback Andrew Luck with be back front in center for the Colts in this game, he sat out the last game because he was undergoing the concussion protocol. And he could not have come at a better time, the Colts currently sit in third place in the AFC South with a 5-6 record, the leader in this division, the Houston Texans are 6-5 so a win against the Jets this week will put them in a tie with the number 2 seed in the division, the Tennessee Titans, and keep their post-season dream alive at least for one more week.

The Jets are currently 3-8, and therefore in last place in the AFC East, with divisional teams like the Patriots and the revelation of the year, the Miami Dolphins the New York Jets are pretty much out of the race at this point, unless God is a Jets fan and they win every single game from here on out…But we all know, God is not a Jets fan.

None the less, the Jets have ample opportunities in this game, if quarterback Ryan Fitzpatrick can somehow steady himself and get some consistency to his game – he has had issues all year long- then the Jets will have a good shot at a win. After all they have some powerful offensive weapons at their disposal, mainly running back Matt Forte and wide receivers Quincy Enunwa and Brandon Marshall. Together the quartet can create all kinds of problems for the Colts defense, who must up their game and try to destabilize Fitspatrick while keeping the Forte, Enunwa and Marshall in check.

The Colts, will be up against a Jets defense that turned out to be somewhat of a disappointment, at the beginning of the season they seemed like a tough outfit on paper, but have turned out to be inconsistent. However, they still have a few tricks up their sleeve and could create rather uncomfortable situations for the Colts. The Jets front seven are the real troublemakers, this means that the Colts will have a tough time with their running game. Enter Andrew Luck; Indianapolis will have to rely heavily on the quarterback’s passing game, this way they will face the Jets secondary instead of their front seven, but in order to be successful the Colts really need to be better at protecting their quarterback; I feel for Andrew Luck, this guy has gotten tossed around all season long, him suffering another concussion at this stage could prove devastating for the Colts; and by this I do not mean to take away any merit from backup quarterback Scott Tolzien, who fought as hard as he could against the Steelers on Thanksgiving day, but it was clear that was just not good enough. 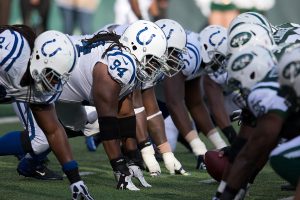 Not surprisingly the Colts are the road favorite in the game as per Ace Sportsbook who has them as 2-point favorites even though the Jets are at home. In simple terms the Jets don’t have much to play for, except maybe save a little face while the Colts still have a slim chance at a post-season start.

The game will be a close match and it most likely will come down to who ever scores last in the 4th quarter, but my money is on the Colts.