The closing game of a very short week 8 in the NFL, features the Minnesota Vikings traveling to Soldiers Field in Chicago to face their divisional rivals the Bears.

Minnesota is no longer the only undefeated team in the league, after losing to the Philadelphia Eagles last week, which should make them even more determined to win this week.

The Chicago Bears accumulated yet another loss last week, this time against the Green Bay Packers, making them 1-6 for the season.

On paper this game should be a no brainer, the Minnesota Vikings are clearly the stronger team and even if their offense failed to get any momentum last week against the Eagles, they should have no problem plowing their way through the Bears.

The Bears should be getting Jay Cutler back this week, whether this is good or bad news remains to be seen. The Bears seem to have decided that this year they were battling for the number one draft pick of 2017 instead of the Super Bowl, and they are currently in a bitter war against the Browns, Panthers and 49ers.

The one thing the Bears can hope for this Halloween night, is that Sam Bradford chokes the same way he did in Philadelphia last week. Bradford performance was as erratic as when he played for the Eagles last season. He was picked off for the first time in the season, he ended up losing two fumbles and only completed 24 out of 41 passes for a total of 224 yards and one touchdown. In his defense, the offensive line simply did not do their job last week allowing Bradford to be sacked 6 times and continually be under pressure.

If the Vikings offensive line plays like they did last week it could turn out to the silver lining the Bears are praying for. This year the bears have 15 sacks placing them 10th in the NFL, not great but not bad. The Minnesota rush game also needs to improve, they had less than 100 yards against the Eagles. 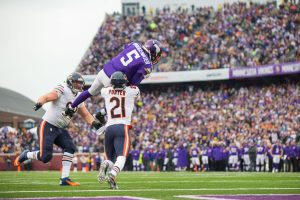 But the reality of life for the Bears is that they are not great offensively and the Vikings defense is still one of the best in the League, they picked off Wentz twice on Sunday and forced 4 fumbles of which they managed to recover a couple.

The Bears are averaging less than 16 points per game, against the Viking defense I doubt they will score more than 10 on Monday night’s game.

This game is probably the easiest pick this week if not the entire season, the Bears can’t even have the home field advantage, they are underdogs at home. For the latest line on the game check AceSportsbook.com.

The Vikings are 4.5 road favorites, although some places have them at -6, in either scenario the line should be a lot higher than that. This is frankly the books attempt to throw the bettors a bone. Vikings against the spread regardless of the number is a sure bet. I predict the final score of the game will be Vikings 27-10.