Wildcard Sunday will provide the stage for what should turn out to be the most interesting matchup in this year’s Wildcard Weekend.

The Green Bay Packers will host the New York Giants this Sunday January 8th, 2017 at 4:40 pm ET in Lambeau Field, in the hopes of breaking what seems like a curse now. The last two times the Giants visited the Packers in the post-season they not only won they moved on to play and win the Super Bowl. The Packers are hoping to put an end to this unsavory tradition this time around.

The Giants finished their regular season with a win against the Washington Redskins to finish their season with an 11-5 record, what is important though is that they are 9-2 in their last 11 contests, but, will this be enough to beat the Packers.

Green Bay ended their regular season with a win over fellow NFC North rivals the Detroit Lions given them the home field advantage in this Wildcard game. The Packers have now won 6 straight games, effectively making them the hottest team in the NFC right now.

The fact that these two teams finished 1 game apart is not what makes this game so interesting, it has more to do with how they are playing. The Giants are playing in a fashion reminiscent of how they won their two championships back in 2008 and most recently in 2012, with an on and off offense but a very strong defense that is only giving up 17.8 points per game on average, the only defense that is better than them right now is the New England Patriots.

The Packers on the other hand are playing at the other end of the spectrum with an almost infallible offense, they have put up at least 30 points in their last 4 contests and are ranked number 4 in scoring in the league. At the beginning of the season Aaron Rodgers seemed liked a shadow of the quarterback he once was, but he found his mojo in the second half of the season and is now a contender for the MVP award.

This game is in essence, a battle of defense versus offense, and the linemakers at Ace Sportsbook are siding with offense in this case, opening the pro football line with the Packers as 6 point favorites, this line has been bet down to 4.5 now, which seems a lot more reasonable. The total has been set at 45, which at first glance might seem high, but totally makes sense once you break it down. The Giants are averaging 19.4 points per game this season, while the Packers as mentioned before have put up at least 30 points in their last 4 games. Not to mention that the Giants have up 24 points in two of their last 3 road games. 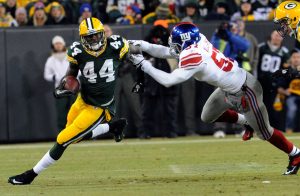 When all is said, and done, I find it difficult to believe that the New York Giants can go into Lambeau Field for a third time in the post season and beat the Packers, I strongly believe that the Packers offense will be too much for the Giants defense, as good as it may be, and that the mediocre Green Bay defense will be able to stall Eli Manning enough to earn the win. Not to mention, that as a Cowboy fan nothing would give more pleasure than to see the Giants go down in flames.