As we reach week 14 of the NFL season we get to enjoy a thrilling game between the Kansas City Chiefs and the Oakland Raiders for the first place in the AFC West division.

The Oakland Raiders are 10-2 in the season while the Chiefs are 9-2, in their division Raiders are 2-1 while Chiefs have an undefeated 3-0 record.  The Raiders lost to the Chiefs back in week 6, so this is a match that promises competitivity and excitement.

Kansas will be playing at home and are currently the favorites to win with a line of -3 while the total is currently 47 at Ace Sportsbook.

Both teams are coming off winning weeks, Raiders beat the Bills 38-24 and Chiefs took a one point win over the Falcons 29-28.

Making a pick between this two teams is hard, and that is because they are both good.

Raiders’ quarterback Derek Carr has had an incredible season, wide receivers Amari Cooper, and Michael Crabtree and running back Latavius Murray have also been essential to the teams’ great results. Offensively Raiders are superior. When it comes to their defensive line, Oakland has its weaknesses, not great but not bad, they need their defense to have a good day against the Chiefs if they want a shot at winning this; Chiefs have been superior the last four times they’ve met, so stats are not on Oakland’s side.

Kansas City Chiefs are averaging 23.4 points per game and allowing in average 20.2, they are playing at home in a short week and whether we like it or not this plays to their favor. Quarterback Alex Smith is doing an OK job while Travis Kelce and Spencer Ware have had good performances. Chiefs’ defense is good, certainly their strength, but they’ve had moments when they simply haven’t looked good, like in their game against Denver; yet they did what they had to do against the powerful Falcons offense last week. 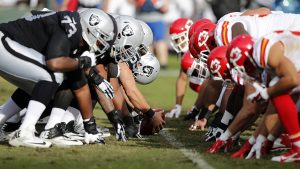 A 53% of the bettors are taking the Raiders plus the points, taking them on a teaser might be the best way to play it safe. Chiefs are the better team overall, and their coach certainly knows how to move his pieces around, but Raiders are resilient, their offensive attacks are well structured. I’d wait a little bit before placing the bet to see how the line moves.  I believe the Chiefs will win, but it will be close.

Pick: Raiders to pull the upset.

If you don’t have an account at Ace Sportsbook open one today! Doing so is simple and free!

Place your bets online via your computer or mobile device, or over the phone on your favorite teams, AceSportsbook.com has a wide offering of sports and props. Request your bonus and begin playing.