Week 15 of the NFL season bring us on Thursday Night Football Rams vs. Seahawks, the two teams face off at 8:25 p.m. EST at the Century Link Field in Seattle, Washington.

Betting on the Seahawks:

Seattle has a record of 8-4-1, they will be playing at home, and they are coming off a horrible loss to Green Bay (38-10). Their defense needs a lot of work, but should have no problem controlling the Rams’ unstructured game, and Seattle’s offense should be enough to cause the Rams plenty of problems.  These two teams faced each other early in the season and the Rams took the win, they also won in their last game of the previous season. Seattle Seahawks inconsistency continues to be their main problem, their defense is their second, but this should be their time to turn things and claim a win over the Rams, they need this win big and this is their time to shine.

Betting on the Rams:

The Los Angeles Rams are going into this match with an unimpressive record of 4-9, to top it all they announced they had fired coach Jeff Fisher, we can’t say we didn’t see that coming, judging from the results the Rams have had at this point in the season it was expected, the fact is, it is impossible to know how this change will affect the Rams’ performance this Thursday, as they are coming off a loss against the Falcons (42-14) and this is a short week; I dare to say it will be a change for the best, but in the long-term, in a 4 day period, it sounds like a recipe for disaster, John Fassel who is taking over as interim head-coach has his hands full. Their offensive game was terrible against the Falcons and has been for the past few games, Case Keenum is simply not cutting it.

Odds to bet Rams vs. Seahawks: 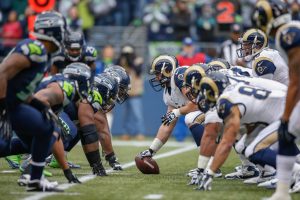 The line, as expected under current circumstances, has the Seattle Seahawks as the favorite giving -14 points, while the total for the game is established at 38.  55% of the bets at this point are placed on Seattle, 63% consider the game will go over 38. With the bad outings by the Rams and the change of coach, one is tempted to say the Seahawks will have no problem winning and covering this high spread, however, going by stats, you’d be surprised to find out that in last season the teams that fired their coaches’ midseason actually went on to win and cover their next games. So, if you want to take your chances on the high line, go for it, the +14 points is tempting. I personally believe it will take a lot more than motivation for the Rams to turn things around in so short notice.

Pick:  Seahawks to win and cover the spread (take a teaser if you want to play it safe). Under on the total.

AceSportsbook.com has the best odds in NFL and all other major sports. Open your account today and begin enjoying playing in a professional online sportsbook.