What would be the best belated Christmas gift? How about some exciting Monday Night Football!

Some believe the Cowboys got off easy with the schedule this season, but on Monday, as they host the Detroit Lions, they will be faced with some tough competition. They have only lost to the New York Giants this year, but could they be in for their third loss of the season against the Lions?

Dallas was a great bet against the spread in the first half of the season, they covered in 9 straight games, but since then they have fallen from grace and are now 0-4 against the spread in their last four matches. Could it be that rookie quarterback is starting to feel the pressure and nerves of a post season, or could it be that the team as a whole, got comfortable with their lead and decided that winning by any margin was good enough.

They lost their second game against the New York Giants this season, the only team that has been able to win against them. They rebounded with a win against the Tampa Bay Buccaneers last week, but again this win was unimpressive at best, the game ended up being a lot closer than it needed to be.

The Lions lost on the road last week against the Giants, it seemed the New York defense was too much for them. But, before that they had won five consecutive games placing them in the lead for the NFC North. They are in a bitter fight for the number one spot in this division with the Green Bay Packers, and will face them in their last game of the season. A win against the Cowboys would not make a difference in the standings, if the Packers prevail over the Vikings on Sunday, but, that doesn’t mean they don’t want to win this game.

The opening line for the game at Ace Sportsbook was Cowboys -7, it has since gone down to -6.5 but I doubt it will move any further. Considering how hard it has been for the Dallas Cowboys to win games by a large margin this season, 6.5 points seems like a very high number, especially if you consider what is at stake for Detroit.

After last week’s win against the Buccaneers, Dallas clinched the division and the home field advantage in the first round of the post-season, so in a way they have little to play for and might be more cautious and protect their key players.

I still believe Ezekiel Elliot will have his way on the field on Monday against Detroit’s running defense which is lacking in more ways than one, but I do not think this will translate into a shutout victory for the Cowboys, I’m sure Matt Stafford and the Lions offense will keep this game close. 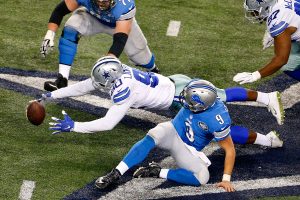