Ace Sportsbook
»  Sporting Journal  »  Football  »
Who Will be the NFC East Champion: Cowboys vs. Giants

The current No. 1 team in the NFC East, the Dallas Cowboys, are on the road this week to face the New York Giants. While the game doesn’t have as much at stake as it did just a week ago, it still has a lot of meaning for both teams.

Last week, it was expected that the Giants would win over the Stealers to bring their record to 9-3, and the Cowboys winning streak was supposed to end as well last week against the Vikings which would bring them to 10-2. Giving the Giants a chance to clinch the NFC East this week. But nothing happened the way it was thought it would, the Giants lost to the Steelers so they are now 8-4 and the Cowboys beat the Vikings extending their franchise winning streak to 11 games. It is now almost impossible for the Giants to win the NFC East but the game still has huge playoff implications for both teams.

As we all recall the Eli Manning and the rest of the New York Giants are the only team who has won against the Cowboys this season, but that was way back in week 1. That was Dak Prescott first professional game and it was not a blow out, the Giants only won by 1 point with a score of 20-19. Neither team is the same as they were in week 1 but the Cowboys have taken off in a direction that nobody expected them to.

Dallas has already clinched a spot in the playoffs, a win against the Giants on Sunday Night will make them the NFC East Champions and grant them home field advantage in the Playoffs. The Giants equally need this win, first to further distance themselves from the other wild-card contenders and maybe a little less important prove that their win over Dallas in week one was for real.

These two franchises have played against each other a total of 109 times, of these Dallas has won 62, lost 45 and tied 2, however, the Cowboys have lost the last 2 games against the Giants. You can be sure Dak Prescott and his team are eager to get a win against the Giants and nullify that tie breaker advantage, and prove that win in week 1 was just a fluke.

Last week loss against the Steelers ended a lot of things for the Giants, obviously, it ended their 6-game winning streak but it also ended Eli Manning’s 2-game streak of not throwing an interception, he was picked off twice in that game, bringing his interceptions to 12 for the season. He is 12-12 against the Cowboys, and he will have his work cut out for himself in this game against the stellar Dallas defense.

Dak Prescott is not the only rookie in the Cowboy’s lineup who would like to prove a few things, his team mate and potential Rookie of the Year Ezekiel Elliot was held to a record low 51 yards on 20 carries in the week 1 game against the G-Men, he may not get to 100 yards in this game (he hasn’t broken the 100-yard mark in the last 3 games) but he will be close to 90 at least. 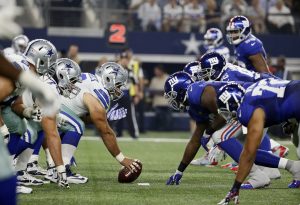 The best odds for this game, can be found at AceSportsbook.com, they currently have the Cowboys as 3-point favorites, I know a lot of people are banking on the fact that rookie quarterbacks do not play well against Manning, but Dallas is a different team, it is not just about the quarterback. I believe the Cowboys will walk away with the win, but they may not cover the spread, so take them on the money line or bet them in a teaser.