The Copa del Rey is one of the most prestigious soccer cups in Spain, the tournament which started back in August of 2016 is currently entering the round of 16, this round features two legs, meaning there will be two matches between the same teams each one playing host once.

One of this week’s most anticipated matches is between the squads of the Real Madrid who are the hosts in the first leg, against Sevilla. The first leg therefore will be played at the Stantiago Bernabéu this Wednesday January 4th, 2017 at 3:15 pm ET.

The Real Madrid squad are in search of their 20th Copa Del Rey tittle, their last win came back in 2014, they are in great form entering the round of 16 after defeating the Segunda Division B team Leonesa in both legs by a large margin, they won at home 6-1 and on the road 7-1.

Sevilla on the other hand missed their chance at the title last season, after losing in the final, the red and white squad are enjoying a 14-2 aggregate win over Formentera. This will be the first meeting between these two franchises in 6 years when they lost to Madrid in the Bernabéu in the 2010-2011 semi-final stage of this competition.

Both teams have a long history of rivalry, and Real Madrid has the historical advantage, having won 6 out of their last 10 encounters, Sevilla has won 3 which means the other game ended in a tie. To add stress to the Sevilla team is the lingering thought that they have not won a game in the Santiago Bernabéu stadium since the 2008-2009 season.

Emilio Butragueño has said that this will be a tough match for the Real Madrid, stating “We know how much of a challenge playing in Seville can be, especially given the passion of their fans” He went on to say “They will push us to the limit and because of that we must perform at our highest level. It could quite easily be a Champions League knock-out tie”

These two teams have improved considerably since their UEFA Super Cup final back in August of 2016, it is almost a shame this match came up in the round of 16 instead of further along the tournament as it will be one of the best match ups in this cup. This is the first game the teams will play after the break and it will be interesting to see which one is better prepared. 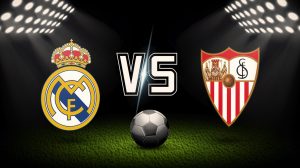 The game will no doubt provide ample opportunities for both teams to create winning opportunities, however, there is no doubt the Real Madrid squad is the better of the two, but it will be an exciting close and high scoring match.

Real Madrid is the obvious favorite in this game as per the latest soccer odds at AceSportsbook.com, but this sport can be unpredictable and Sevilla is such a competitive team that there could be an upset although this is unlikely.

Real Madrid will win the match by a score of 3-1 so make sure to bet on them and the over.