While both the New England Patriots and the Miami Dolphins have their post-season spots secure, this game retains its appeal as both teams still have a lot to play for.

A win for Miami would mean they would move up to the 5th seed in the AFC post-season rankings, of course for that to happen the Kansas City Chiefs would have to lose, but, nonetheless it would have great implications for them. The Patriots on the other hand are looking for a win to get home field advantage for the remainder of the post-season.

New England is trying to avoid the situation they were in last season, where they were at number 1 going into the final week of regular season, but didn’t get the home field advantage because they lost to none other than the Dolphins. That led to the Broncos to take the number one spot and eventually defeat the Patriots and move on to win the Super Bowl. While the scenario is not the same this year, as their main rival the Oakland Raiders, have lost Derek Carr, their starting quarterback, making it difficult to take the AFC lead, they will still try to win this game.

The truth is, the Patriots are not as invincible as some think, there is a real difference in how they perform against AFC teams when playing at home versus playing on the road, and we have seen bad things happen to them while playing away from home in the playoffs, so this is an important game for the franchise.

Because of all of this, I don’t expect Bilichick to hold back his starters in this game, but, they will be more cautious than normal, on the Miami front, I expect the opposite; it is unlikely that they will move up to the 5th seed, and I would assume head coach Adam Gase understands this, which means that he will rest any player that is injured, this does not mean no key players will start, but anyone who is nursing a injury will most likely sit this game out, so they have plenty of time to recoup for the wildcard game, unfortunately this means almost everyone in the Miami Dolphins defense. 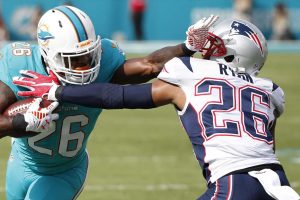 As was to be expected, the Patriots opened earlier in the week as heavy road favorites, AceSportsbook.com has them as 9.5 point favorites, which is a lot of points to cover on the road against a winning team, but, if there is a team that can do it, it’s the Patriots. The total is settling somewhere around 45.

I think everyone feels the same, there is little chance for the Dolphins to win this game, even if they are home. This is the first time they reach the playoffs since 2008, and they haven’t won a Super Bowl since 1973, I can assure you they will not risk any key player getting injured, they already lost their starting quarterback Ryan Tannehill, they can’t afford losing any other player. So not only will they be cautious on the field, as I said before they won’t start any player who needs to rest.