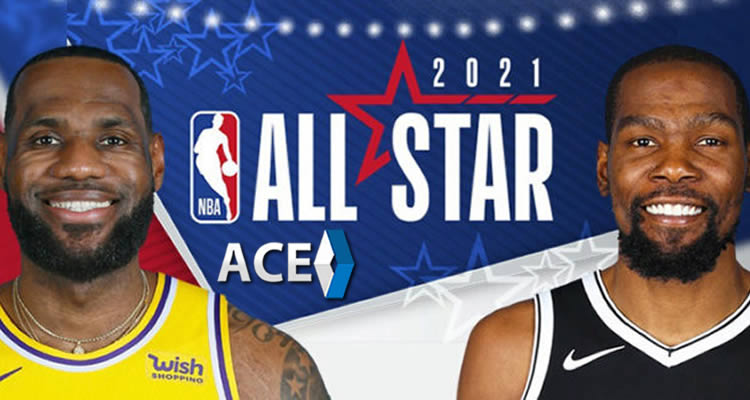 It’s going time All-Star weekend is finally here in Hotlanta, and Ace Per Head is here to help you get in on the action!

This year’s events will be hosted in Atlanta, Georgia at State Farm Arena the home of the Hawks. So far this 20-21 NBA Season has been unorthodox unlike any before, playing during the middle of a pandemic, with no basically no fans, but the show must go on. This season they decided to keep the All-Star game and its other competitions alive, even though we’re amidst a pandemic and some of the league’s top players have expressed concerns. They are using the same game format for the All-Star game from 2018, where the best players from each conference are voted captains, then those captains draft a team from other All-Stars. ​HOW DO BOOKIES MAKE MONEY? A CLOSER LOOK AT THE ODDS.

This year the teams are Team LeBron James and Team Kevin Durant, as Team LeBron is looking for their fourth straight All-Star game win. As Team LeBron has beaten Giannis Antetokounmpo’s team by a mile the past two years and crushed Team Curry back in 2018. Due to this Pandemic, the All-Star game is going to be looking a little bit different in Atlanta, as all of the competitions will be over the span of one day. The day will start with the Taco Bell Skills Challenge, followed by the Mountain Dew Three-Point Contest, then the seventieth All-Star Game. Now don’t worry we didn’t forget about the AT&T Slam Dunk Contest, this vital part of All-Star Weekend will be during the Half time of the All-Star Game. But unfortunately, the rising stars game was canceled, but all the events are planned to commence at 6:30 p.m. Eastern Time.

The 2021 NBA All-Star Game Rosters are as follows, Team LeBron: the Starters are LeBron James, Kawhi Leonard, Luka Doncic, Nikola Jokic, Stephen Curry. Then the Reserves are Anthony Davis, Paul George, Rudy Gobert, Damian Lillard, Donovan Mitchell, and Chris Paul. This Team LeBron might be the best one yet, they are stacked and competitive. The All-Stars of the Western Conference are shining bright, and are definitely going to give Team Durant a run for their money. For Team Durant: the Starters are Kevin Durant, Giannis Antetokounmpo, Zion Williamson, Kyrie Irving, Bradley Beal. Then the Reserves are Jaylen Brown, James Harden, Zach LaVine, Julius Randle, Ben Simmons, Jayson Tatum, Nikola Vucevic. The Eastern Conference has been dominant this season with players from the best teams in the league such as the Brooklyn Nets, Milwaukee Bucks, and the Philadelphia 76ers. They have the Big three from Brooklyn which is an absolute powerhouse, as well as three of the best bigs in the National Basketball Association Joel Embiid, Ben Simmons, and Giannis Antetokounmpo. How Do Bookmakers Make Money From Sports Betting?

Four years ago when the NBA ditched the old East vs. West games that they used for years, to this new format to shake things up and make it more exciting for viewers and the players. This is the fourth year in a row where they are using this draft system, and it has been successful so far. Kevin Durant and LeBron James were tabbed as the highest vote-getters being the best players from both conferences, and they got to choose their teams from a list of Starters and Reserves voted by the fans. Even though Kevin Durant is sidelined with a hamstring injury, he is still going to be Captain in this game. Also, LeBron received the most overall votes so he got the first pick from the starters while Durant gets the first to pick from the reserves. Instead of a total score from tip-off to the last buzzer, they are going to do the same as last year’s ASG with the first three quarters being played as individual games, while the last one will be played to a final score to determine the winner of the All-Star Game. Each quarter will begin at 0-0 and whichever team wins their chosen charities will benefit as well. In this game, this final score of the fourth quarter is made up by taking the top team’s total score in three quarters and add twenty-four points, (to honor the late great Kobe Bryant). There is no time limit for the last quarter, the winner will be decided when a team reaches or surpasses the target score. In last year’s All-Star Game, Team Giannis was beating Team LeBron 133-124 for the first three quarters. Then add Kobe’s twenty-four points to Team Giannis’ 133 points, for a total target score of 157. When all was said and done Team LeBron had a major comeback in this down to the wire game beating them 157-155, outscoring Team Giannis, thirty-three to twenty-two. Taking Bets on Sports – Offshore Sportsbooks.

When betting on the 2021 NBA All-Star Game, remember the odds will have a short spread. For instance, if Team LeBron is -150 on the money line, it means betting 150$ on Team LeBron and they win the All-Star Game, you would win you 100$. Then this would make Team Durant the Underdog (+130) on the $ line in this matchup. So if you were to put 100$ down on Team Durant, you would rank in 130$ if you pulled off the upset. Also for the Total or Over/Under for this matchup this game is always a high-scoring contest, where players really show off their skills so don’t be shocked if you stumble upon a total in the 300’s. The past six All-Star Games have witnessed three hundred points, while in 2017 the score was a total of 374, and last year’s total was 312 points executing the target scoring format. The Eastern Conference holds a thirty-seven to twenty-eight advantage in this game over the years.

Also, players have won the All-Star Game MVP award more than once, Russel Westbrook has won it twice and became the first person to do it consecutively, while other players such as Bob Pettit and Kobe Bryant have four ASG MVP awards which is the record for the most in NBA history. Then past All-Stars like Michael Jordan and Shaquille O’Neal have won it three times, and one of this year’s captains LeBron James has won it three times as well. So remember when betting on the NBA All-star you can add some extra fun with prop wagers, like who will score the most points, who will grab the most rebounds, and who will be the MVP. Online Sportsbook Software and Sportsbook Payouts Explained.

At Ace Per Head sports betting couldn’t be any easier or enjoyable, with our easy-to-use Pay Per Head software the sky is the limit! AcePerHead.com is a bookies paradise, and with the best lines in the business, let us help you maximize your profits.