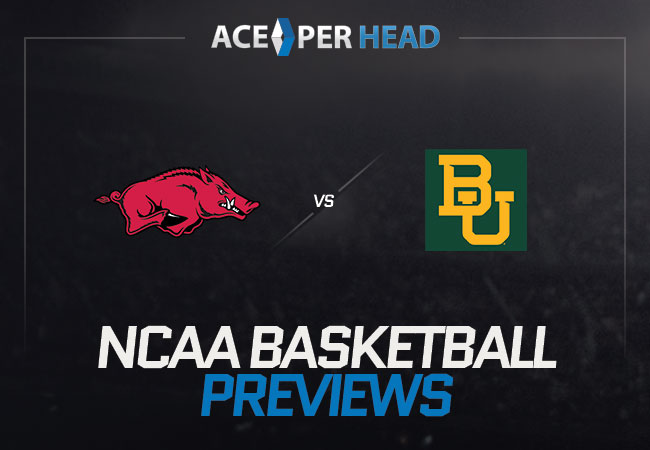 Lucas Oil Stadium is home to the Elite Eight matchup between the Arkansas Razorbacks and the Baylor Bears.

Baylor is going into this game as the favorites and is playing with a record of twenty-five wins and two losses. The Bears have amassed 2,242 points so far this year for an average of eighty-three points per game, and they are pulling down thirty-six rebounds per game. The Bears are also committing seventeen fouls per game, and are hitting seventy percent of their shots from the free-throw line. On offense, they are hitting forty-nine percent from the floor, and sixteen assists per game, while they are turning the ball over twelve times a game. The Baylor Bears are ranked fiftieth in points allowed with an average of sixty-five points per game allowed. 5 Helpful Online Betting Tips.

They are forcing seventeen turnovers a night on defense, and they allow teams to shoot forty-three percent from the field. Also, the Bears have permitted their opponents to put up 171 from three-point range and convert on sixty-nine percent of their shots from the free-throw line. As well s twelve assists and thirty rebounds given up nightly. In their last game, Baylor beat Villanova sixty-two to fifty-one. The Bears grabbed twenty-seven rebounds, as well as losing possession of the ball five times, and they collected eight steals. Baylor went to the line ten times, and they were able to convert on seven of their attempts. Then from the three-point range, they went three for nineteen and went twenty-six for fifty-nine from the floor. Baylor let Villanova drain twenty from the field, three from three-point range, and eight for eleven from the free-throw line. The Advantages of Bookie Software For Your Sportsbook.

Lastly, they relinquished thirty rebounds in total to the Villanova Wildcats. A key player for Baylor was Davion Mitchell and he went hard in the paint for the Bears. Mitchell went seven for thirteen and shot fifty-four percent from the field. He put up fourteen points, two assists, and one rebound in  his thirty-six minutes of playing time. Another star for the Baylor Bears was Jared Butler who went four for fourteen, shooting twenty-nine percent from the floor. He amassed nine points, three assists, and two rebounds in his thirty-six minutes on the court. The challengers the Arkansas Razorbacks are going into this matchup with a record of twenty-five wins, and six losses. As far as shooting goes they are putting up eighty-two points a game, having them ranked eleventh in Division 1. Arkansas is shooting forty-five percent from the field, they have hit 230 from the three-point range, and seventy-four percent from the free-throw line. Then the Razorbacks are grabbing an average of forty rebounds a match, and are ranked fifteenth in Division 1 Basketball for passing, with a total of 453 amassed so far. They are losing the ball thirteen times per game, and are committing seventeen fouls nightly. On defense, the Razorbacks are forcing opponents to turn the ball over fifteen times a game, and they manage to draw nineteen fouls per contest. They have given up thirty-three percent of three-pointers, as well as 783 from the field goal range. Trusted sportsbook software online.

This Arkansas team is giving up seventy-points per game to the opposition. As well as 376 assists given up so far, and thirty-six rebounds relinquished as well. The last time Arkansas took the court they beat Oral Roberts seventy-two to seventy. It was an action-packed game that was down to the wire, the Razorbacks went twenty-nine for seventy-seven from field goal range, the one for nine from three-point range, then went thirteen for fifteen from the free-throw line. Then the Razorbacks collected forty-four rebounds, dished thirteen assists, then forced the Golden Eagles to turn the ball over thirteen times, and they stole the ball seven times from them too. They allowed Oral Roberts to go twenty-six for sixty-one from the field, they drained eight from downtown and went ten for thirteen from the free-throw line. Oral Roberts also collected thirty-two rebounds, sixteen assists, seven steals, and four rejections. A key player for the Razorbacks was Jalen Tate he put up twenty-two points, six assists, and four rebounds in his thirty-eight minutes of playing time. Tate ended the night shooting fifty-three percent from the floor, going nine for seventeen. Davonte Davis was another player who was clutch for Arkansas, he dropped sixteen points, grabbed eight rebounds, and tacked on two assists in his thirty-four-minute tenure this game. Davis finished shooting fifty-four percent connecting on seven of thirteen shots taken. Arkansas has been playing Elite recently but so has Baylor, but there can only be one true Elite winner in this Elite Eight matchup. New Way of Bookmaking: Pay Per Head Services.

At www.AcePerHead.com our pick to win this game against the spread is going to the Arkansas Razorbacks, and to take the Over.