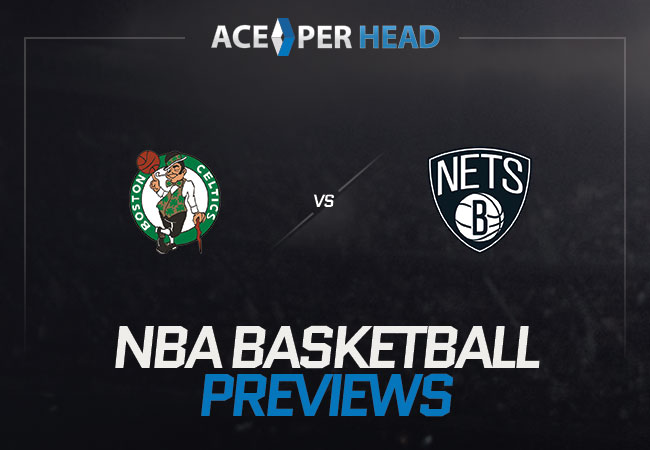 This Friday night Kyrie Irving and the Brooklyn Nets host the Boston Celtics for some East Coast Basketball action.

The Nets our hosts for this event are currently playing with a record of thirty-nine wins, and twenty losses. Brooklyn has scored 7,008 points so far this season, and they are averaging 119 points per contest, and are recording forty-four rebounds per game. As far as fouls go they have committed nineteen fouls against their opponents, while they are hitting eighty percent of their shots from the free throw line. On offense they are the best team in the NBA for shooting from the field with a rate of forty-nine percent. They are assisting their teammates twenty-seven times a game, which is the sixth best in assists, and they end up turning the ball over fourteen times a game. On defense they are letting up an average of 114 points per game,and are conceding twenty-four assists and forty-two rebounds per game. They have given up 773 shots from three point range, and are letting teams hit forty-six percent of their shots from the field. Lastly they are letting teams hit seventy-seven percent of their shots from the free throw line, and are forcing their opponents to turn the ball over thirteen times a game.

The last time they played, the Nets lost to the Toronto Raptors by the score of 114-103. Brooklyn managed to grab fifty rebounds in this game, as well as turning the ball over thirteen times, and recording three steals from the Raptors. During this contest the Nets took twenty-three trips to the free throw line and they drained eighteen of those tries, shooting seventy-eight percent. From three-point land the Nets went thirteen for forty-one, shooting thirty-seven percent. Then the Nets went thirty-six for ninety-one from the field. On defense the Nets allowed the Raptors to go thirty-nine for ninety from the field, drained eighteen for forty-seven from three-point land. Lastly on their twenty-one free throw attempts they connected on eighteen of those shots, and collected a total of forty-eight rebounds from Brooklyn when all was said and done. A key player for the Brooklyn Nets is Kyrie Irving he amassed twenty-eight points, eleven rebounds, and eight assists in his thirty-seven minutes on the court. Irving shot ten for twenty-one, and amassed a field goal percentage of forty-seven percent. Another player that has been a star for Brooklyn is Joe Harris he amassed fourteen points, four rebounds, and recorded one assists in his thirty-four minutes of playing time. During his tenure for the Nets in this game he went five for ten from the floor, shooting fifty percent for the night. The challengers the Boston Celtics are going into this contest as the underdogs, and are currently playing with a record of thirty-one wins, and twenty-seven losses. The Celtics are averaging 112 points per game, which is the sixteenth best in the NBA. Boston is shooting forty-seven percent from the field, they have drained 767 from three-point land, and have hit seventy-seven percent of their free-throw line. The Celtics are pulling down forty-four rebounds per game, and have assisted their teammates 1,356 times so far this season, and they conceded 1,380 assists to their opponents. The Celtics are losing possession of the ball fourteen times a gam, and are drawing nineteen fouls a match.

The Celtics have given up 824 from the field, and thirty-seven percent of shots from the field, helping them average 110 points per game allowed. Lastly the are giving up forty-two rebounds a contest to their opponents. In their last time out on the court the Boston Celtics battled the Chicago Bulls, and lost 102-96. Boston went home shooting thirty-six for seventy-seven from the field, and they drained ten points from three-point land. Then on their fifteen trips to the free-throw line they drained fourteen shots. As far as rebounding goes the Celtics grabbed thirty-nine rebounds, and conceded forty rebounds to Chicago. In this contest Boston recorded twenty-one assists, eight steals, and lost possession of the ball twelve times. On defense the Celtics permitted the Bulls to shoot forty-one for ninety-one from the floor. The Bulls also dished thirty assists, and collected eleven steals in this contest. Lastly Chicago went nine for ten from the free-throw line, and drained eleven times from three point range. A key player for the Boston Celtics is Jaylen Brown, he put up twenty-three points, grabbed four rebounds, and dished 1 assists in his thirty-seven minutes on the court. Brown finished going 10 for fifteen, shooting sixty-seven percent. Then another essential player for the Celtics is Jayson Tatum, during his thirty-seven minutes on the court he amassed fourteen points, dished ten assists, and collected thirteen rebounds for Boston in this matchup. When all was said and done he went three for seventeen from the floor, and shot seventeen percent. The Boston Celtics and the Brooklyn Nets have powerful lineups, but this Brooklyn team has been on fire this whole season. At Ace Pay Per Head our pick to win this game against the spread is going to the Brooklyn Nets, they have what it takes to win this one, & continue their road to a possible championship.

When it comes to pay per head basketball lines, few are as gifted as the line managers from AcePerHead.com. These guys never cease to amaze, the way they confidently post early lines and the subtle line movements during the day that entice players to bet the desired side are a thing of beauty.