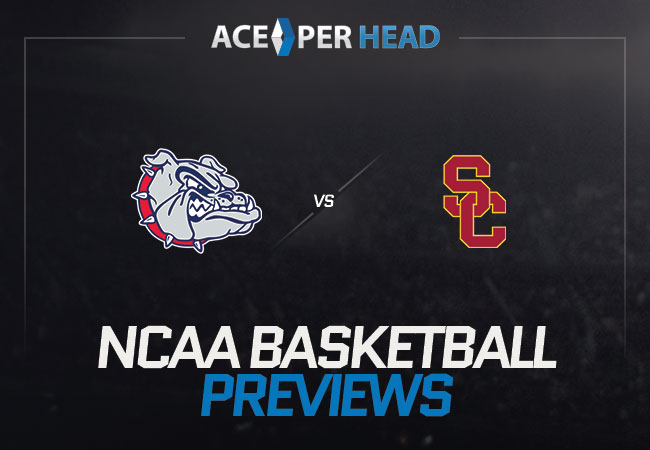 Lucas Oil Stadium is home to the Elite Eight matchup between the Gonzaga Bulldogs who are hot right now, and the USC Trojans who have been on a hot streak as well.

The question is will the Trojans be able to break Gonzaga’s undefeated streak. Gonzaga is going into this contest as the favorites and is playing with a record of twenty-nine wins, and zero losses. So far, this season they have drained 2,663 points this season, for an average of ninety-two points per game. The Bulldogs are collecting thirty-eight rebounds per match, and are relinquishing thirty rebounds to the opposition. They are committing sixteen fouls per game while they are shooting seventy-four percent from the free-throw line. Then on offense, the Bulldogs are shooting fifty-five percent from the floor, which is the tenth best on college hoops. Then they are second in college basketball in assists with an average of nineteen per game, and they manage to turn the ball over twelve times a game. The Bulldogs are giving up sixty-nine points per game, as well as eleven assists. On defense Gonzaga has given up 195 three-pointers, forty-two percent of shots from the floor against them, and have let opponents hit seventy percent of their shots from the free-throw line. They also managed to force fifteen turnovers in this contest. How To Become A Bookie: All Your Questions Answered.

The last time Gonzaga took the court they defeated the Creighton Bluejays, 83-65. the Bulldogs grabbed thirty-four rebounds while giving up twenty-five rebounds to the Bluejays. Gonzaga took a trip to the line ten times and they were able to connect on six of them. Then from a three-point range, they drained nine, then thirty-four for fifty-seven from the floor. The Bluejays went twenty-eight for sixty-nine from the floor, drained five from three-point land, and went four for eight from the free-throw line. Drew Timme went Hard in the Paint for the Bulldogs he went ten for fourteen and shot seventy-one percent. Timme also put up twenty-seven points, six rebounds, and four assists in his twenty-two minutes of playing time. Another key player for the Gonzaga Bulldogs was Andrew Nembhard, he left the court with seventeen points, eight dimes, and four rebounds in his thirty-six minutes on the court. Nembhard went seven for nine, shooting seventy-eight percent from the floor. The Challengers the USC Trojans are going into this contest with a record of twenty-five wins, and seven losses. Then they are averaging seventy-five points per game which is seventy-fifth in the nation. They are connecting on forty-seven percent of their shots from the field this season. Then the Trojans are hitting thirty-six percent of their three-point shots draining 210 of their shots, as well as sixty-five percent of their shots from the free-throw line. What Is a Pay Per Head Service? (And Why You Need One).

USC is grabbing thirty-nine rebounds per game, and they have given up thirty-two rebounds as a team. Then they have collected 449 assists, which puts them at the sixteenth best in college basketball for passing the ball. Then they are losing possession of the ball twelve times a game, as they committing fifteen fouls nightly. On defense, they are forcing their opponents to turn the ball over twelve times per game, and they draw nineteen fouls nightly. Also, the Trojans are allowing opponents to collect 399 assists this season, thirty-three percent of shots against them from three-point land, and 747 total drained from the field this season. This USC Trojan team is giving up an average of sixty-five points per game to their opponents. The last time USC took the court they defeated the Oregon Ducks by the score of eighty-two to sixty-eight. The Trojans ended their last game with a shooting percentage of fifty-seven percent going thirty-one for fifty-four from the field, they netted teen from three-point land and went ten for twelve from the free-throw line. The Trojans grabbed twenty-eight rebounds while giving up twenty-nine to the Ducks. They also dispersed fifteen assists, forced eleven turnovers, and recorded five steals. Then on defense, they awarded the Ducks to shoot five for twenty-one from three-point land, then they put up twenty-six from the floor, and drained eleven out of twelve shots from the free-throw line. The Ducks also amassed three blocks, seven steals, and fifteen assisted when they walked off the court. The Ultimate Guide on How to Become a Bookie.

A key player for the USC Trojans was Isaiah White he amassed twenty-two points, five rebounds, and one assist in his thirty-two minutes on the court. White went eight for ten shooting putting up eighty percent from the floor. Then another key player for the Trojans was Tahj Eaddy, he put up twenty points, three assists, and two rebounds in his thirty-four minutes on the court. Eaddy ended the matchup going seven for eleven, shooting sixty-four percent from the floor. How to Be a Successful Online Bookmaker: The Ultimate Guide.

Both of these teams have been dominant so far this tournament, and now it’s time for a battle to see who will move on and live another day. At Ace Pay Per Head our pick to win this game against the spread is going to the Gonzaga Bulldogs.