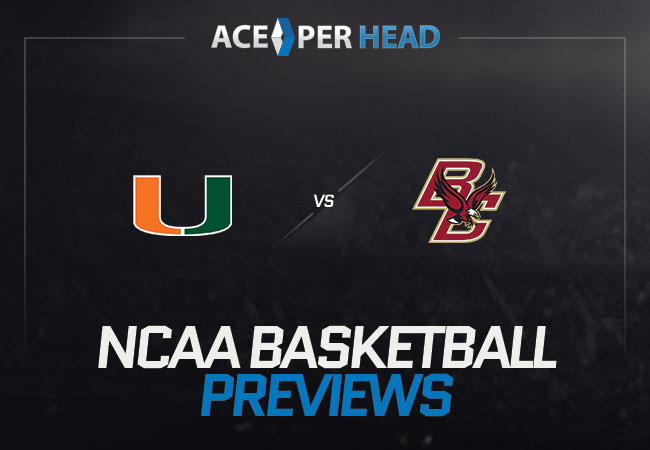 The Boston College Eagles head down to the Sunshine State to take on the Miami Hurricanes for a battle in the 305.

Miami has a current record of seven wins, and sixteen losses in division 1 so far. On offense this season, Miami is hitting forty-two percent from the field, and is averaging sixty-five points per game for a total of 1,502 on the season. As far as rebounds, they lost 33 to the Cavaliers. However, they grabbed thirty-five a game, while dishing eleven passes per match, losing possession of the ball thirteen times a match. This Miami team is committing twelve fouls a contest and is shooting seventy percent from the free-throw line.

The Hurricanes are giving up seventy-one points per game, and have allowed 210 from beyond the arc, forty-five percent from the field, and are giving up an average of ten from the free-throw line a night. Also, as a unit, they are giving up fifteen assists, thirty-five rebounds, and are forcing twelve turnovers a game. This Miami team is a giant on defense, but the last time they played they lost to the Virginia Cavaliers 65-21, and they pulled down twenty-eight rebounds. They also lost possession of the ball to the Cavaliers eleven times but managed to take it back five times. Find a guide for pay per head and bookies.

The Hurricanes drew the foul eight times and made seven out of their eight attempts from the free-throw line. From beyond the arc, they netted four out of fifteen shots and went twenty for fifty-two from the field. On defense, the Hurricanes gave up twenty-three from the field, eight from three-point land, and eight from the free-throw line. A key player for this team was Elijah Olaniyi, and he was vital for Miami in their last contest. Olaniyi played thirty-nine minutes on the court and put up twelve points while grabbing six rebounds. The Challengers, the Boston College Eagles, are going into this game as the underdogs, and are currently playing with an NCAA Basketball record of four wins, and fourteen losses which are underwhelming. They are losing the ball thirteen times a game and are fouling sixteen times a match. For rebounds, they are grabbing thirty-three rebounds and have given up thirty-seven rebounds to the opposition. They are dishing the rock 211 times so far this season, shooting 170 three-pointers, seventy percent from the free-throw line, and forty-two percent from the floor for a total average of seventy-two points per match. This Eagles team is forcing the turnover fourteen times a match, as well as being great at drawing the fouls with an average of eighteen fouls a game.

Boston College has given up 534 points from the field this season, 260 assists, and thirty-five percent from beyond the arc for a total of seventy-nine points per game allowed. The Eagles played the Seminoles from Florida State the last time they took the hardwood, and they took home a huge loss with a blowout score of ninety-three to sixty-four. Boston drained twenty-two from field goal range, twelve from three-point range, and was absolutely atrocious from the free-throw line only making eight out of seventeen attempts. As far as rebounding goes, they grabbed thirty-one and relinquished thirty-three to Florida State. They dished ten assists and grabbed nine steals while capping it off with seventeen turnovers. On defense, BC allowed the Noles to go thirty-five for sixty-three from the field. Also, they netted thirteen from the three-point range, and they went ten for thirteen from the free-throw line. Sadly, this is exactly what a struggling team can’t be doing. Boston College needs to get their fouls under control until they get a game plan to start playing competitively. They also collected nineteen assists, nine steals, and eight blocks. A star player for this team is Jay Heath who is a role player for this team. Heath scored twenty-eight points going nine for sixteen, with one rebound, and one assist in a total of thirty-seven minutes of playing time. A PPH blog for online bookmakers.

Another player who makes a huge impact for this Eagles team is Makai Ashton-Langford, which he went six for ten putting up fourteen points, grabbing four rebounds, and playing twenty-four minutes by the end of this match. Both Ashton-Langford and Heath shot over fifty percent from the field. Makai went sixty percent, while Jay Heath went fifty-six percent from the field. Both teams are fierce competitors, but the way Boston played against a high-caliber team I don’t see them beating Miami or making it far in the tournament in general.

At AcePerHead.com our pick to win this game against the spread is going to the Miami Hurricanes. They have what it takes, they’ve got the eye on the prize and you should get in on the action while you can. At Ace Per Head, our lines are the best in the bookie business, and when you bet with you can play with ease and confidence for nothing but fun!