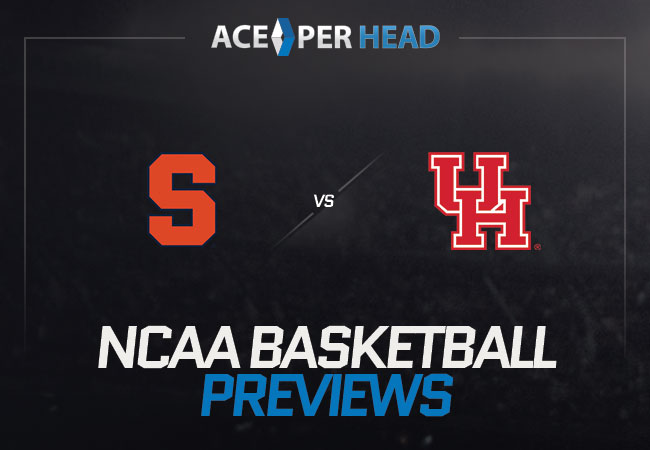 The Big Dance continues at the Hinkle Fieldhouse in Indianapolis, Indiana as the Syracuse Orange take on the Houston Cougars for the Sweet Sixteen round.

Houston is going into this matchup as the favorites and is playing with a record of twenty-six wins and three losses so far. Offensively, the Cougars shoot forty-four percent from the field. Also, Houston scored 2,246 points on their opponents this season and is averaging seventy-seven points per game. The Cougars are committing eighteen fouls per game and are hitting seventy-four percent of their shots from the line. On defense, the Cougars are ranked second in points allowed per game with a total of fifty-eight points. Defensively, Houston has given up 159 three-pointers, sixty-six percent of free throws against them, and allowed the opposition to hit thirty-seven percent of shots from the floor, which is the best in college basketball. They are collecting forty-one rebounds per game, fourteen assists, and they lose possession of the ball eleven times per game, while they have given up ten assists and thirty-two rebounds per game to the opposition. However, on defense, they are forcing teams to turnover fifteen times per game. The last time they took the court, the Houston Cougars took on the Rutgers Scarlet Knights and won by a score of sixty-three to sixty. How People Can Get Nod About Pay Per Head Services and Annoying Clashes.

The Cougars collected thirty-three rebounds while relinquishing twenty-seven to the Scarlet Knights, losing possession of the ball ten times, and tacking on nine steals. The Cougars went to the line eighteen times and only managed to drain eleven. Houston made eight shots from three-point land, having twenty-two for fifty-nine from the floor. The Cougars gave up twenty-two tries from the field to Rutgers, as well as seven from three-point land, and went nine for twelve on their trips to the free-throw line. Quentin Grimes was a key player for the Cougars in their last game. Grimes drained twenty-two points and went seven for fifteen for the Cougars. He also tacked on nine rebounds, and one assist in his forty-minutes on the court. Another key player for this Houston Cougars team is Dejon Jarreau, as he dropped seventeen points, grabbed five rebounds, and dished two assists in his thirty-two-minute tenure in their last victory. The challengers, the Syracuse Orange, go into this game with a record of eighteen wins, and nine losses, while they have turned the ball over eleven times per game, and are committing fourteen fouls per game. As a team, Syracuse is grabbing thirty-five rebounds per game, as they relinquish thirty-eight rebounds off the glass, and amass 414 assists, which is thirty-third best in college basketball. Online Bookie – An Overview.

The Orange have netted 232 tries from three-point land, seventy-eight percent of shots from the free-throw line, and forty-five percent from the field, all for an average of seventy-six points per game. Defensively, they are forcing the opposition to turn the ball over fourteen times per game, and they draw sixteen fouls. They give up 469 assists to opponents this season and are allowing teams to score an average of seventy points per game. Opponents have hit 684 from the floor, and thirty-two percent from three-point land. The last time the Syracuse Orange played, they beat the West Virginia Mountaineers by the score of seventy-five to seventy-two. Syracuse drained twenty-seven from the field, fourteen from three-point range, and made seven out of their eleven attempts at the free-throw line. The Orange collected twenty-seven rebounds and dished eighteen assists. While on defense, they forced fourteen turnovers and recorded six steals. Syracuse let West Virginia shot twenty-six for seventy from the floor, nine out of eleven from the free-throw line, and eleven attempts from beyond the arc. As well as giving up eighteen assists, they had eight steals in this match. West Virginia grabbed thirty-seven rebounds and recorded one block. A star for this Syracuse Orange team was Buddy Boeheim who put up twenty-five points, shooting eight for seventeen. Boeheim also recorded three rebounds, and one assist in his thirty-seven minutes in the game. A Closer Look At The Trial Period On Pay Per Head Services.

Another key player for the Orange was Marek Dolezaj, who put up twelve points, six rebounds, and five assists in his thirty-eight-minute tenure on the court. The Syracuse Orange and the Houston Cougars are two dominant forces in College Basketball and only one will be able to move on to greatness. Payment Methods Used by Online Casinos.

At www.AcePerHead.com our pick to win this game against the spread is going to the Houston Cougars, and to take the Over. Ace Per Head offers you competitive live lines and odds on NCAA Basketball for the NCAA March Madness tournament, brackets, props, and futures!