Three Great Matches to Bet on Boxing this Weekend 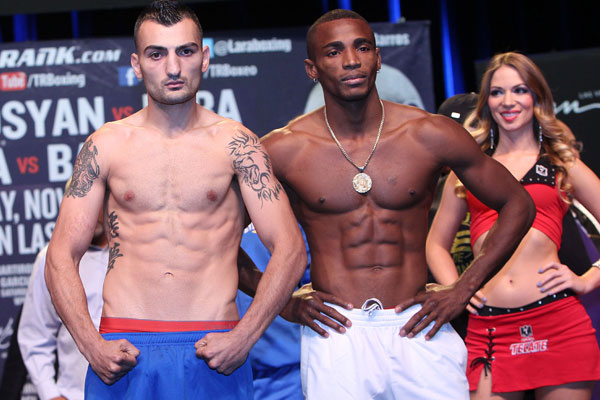 Boxing is back this weekend with a great card that includes three world title fights and that will happen Saturday, May 21 at The Chelsea located inside The Cosmopolitan of Las Vegas and shown Live on SHOWTIME.

Cuban Erislandy Lara who has 22 wins (13KO’s), 2 draws and 2 loses is putting his WBA Super Welterweight World title on the line when he faces Vanes Martirosyan  for a second time,  Martirosyan has a record of 36 wins (21 KO’s), 2 draws, 1 lose;  their first fight took place in 2012 and it ended in a technical draw, a draw that many felt was unfair, as stats showed Lara landed 74 punches to Martirosyan’s 33, he landed more in every single round. Judges were probably watching a different fight, or simply saw Martirosyan come forward enough to impress two of them; not the first time or the last that Lara has gotten an unfair result; he is now getting a chance to leave no doubt of his superiority and he is not about to waste it.  Lara is a smart, technical boxer, a southpaw that knows how to use his jab and his speed to his advantage but he needs to stay aggressive round after round in order to convince the judges; Martirosyan is a tough contender, experienced and with an awkward style that makes him a difficult fighter to fight.  Prediction for #LaraMartirosyan:  Lara by UD.

Will the Charlo brothers make history as the first twins to hold world titles in the same division?

IBF World super welterweight champion, Jermall Charlo, will defend his belt and his perfect record of 23 wins (18 KO’s) against former world champion Austin Trout who has a record of 30 wins (17KO’s) and 2 loses. Charlo has a clear advantage when it comes to height and reach over an experienced Trout. Trout beat Miguel Cotto in a UD win, and lost against Saul Alvarez and Erislandy Lara by UD.  This is probably the last title shot 30 year old Trout is getting so it’s expected he is going to give it his all and present a hard challenge for Jermall. Charlo has a chance to prove himself against a skilled tough opponent. Prediction:  Jermall Charlo by UD.

Jermall’s twin brother, Jermell Charlo is getting his first opportunity to fight for a title, the vacant WBC world super welterweight belt, against olympian from the Virgin Islands, John Jackson. Undefeated 27-0 (12KO’s) Jermell , is a skilled defensive fighter, he has good speed,  and is facing a very difficult opponent in John Jackson, who holds a record of 20 wins (15KO’s) and 2 loses. Jackson has the advantage in both height and reach, he is also a power puncher, and considering he is coming in as the underdog he will likely try to get the KO win. Charlo needs to display all his skills in this match that could eventually steal the show.  Prediction: Jermell Charlo by UD.

Three competitive fights to bet on, don’t miss the action, make sure to visit AceSportsbook.com to get the best boxing odds. #LaraMartirosyan #CharloTrout #CharloJackson