It should come as no surprise that the New England Patriots are expected to blow the Houston Texans out of the playoffs this coming Saturday, January 14th, 2017.

We were all expecting Tom Brady and the gang to be the favorites but few expected they would be the biggest favorites in the last 18 years.

New England is currently listed as a 15-point favorite at AceSportsbook.com, the total is listed as 44.5. While that seems like a huge number to cover, this is the Patriots we are talking about, a team that went 14-2 in the regular season, and by most metrics were the best team in the league this season.

Saturday’s Divisional Playoffs, will pair one of the best quarterbacks in history Tom Brady against Brock Osweiler who had a disappointing first year with the Texans. By all intent and purposes, the Texans should not even be here, they just got incredibly lucky when the Oakland Raiders starting quarterback Derek Carr broke his leg towards the end of the regular season.

So, unless the Patriots fall out of grace with the gods there is little to no chance of the Texans advancing to the next round, the question that remains to be answered is if the Patriots can cover the score. With a spread this high there is sure to be no money line on this game so let’s analyze how the Patriots fair against the spread.

Here are the facts, the Patriots have only dropped one game after Brady returned from his 4-game suspension, and they have gone 10-2 ATS. The line on this game opened with the Patriots as 16 point favorites, and has now been wagered down to 15, I personally feel this is as low as it will get, and if you were inclined to bet on the Texans you should have done so earlier in the week.

Brady has arguably been playing some of the best football of his career this season, and a much better team would have a hard time winning against him, then again, the one thing that the Houston Texans have done well this year is defend against the pass, if they can manage to hold Brady to human standards they might cover the spread, but let me be clear, they won’t win this game.

Historically, the Texans have never been a match for the Patriots, they have played at New England 4 times in their franchise history and in every single game they have been blown out, in their most recent appearance they lost 27-0.

To be fair, when Osweiler played with the Broncos last season they managed to beat the Patriots 30-24, the way they managed that was with a great defense, and the Texans do have that this year, their defense finished as No.1 in terms of fewest yards surrendered. So, if Houston plays its card just right, and the planets all align and blind Brady for at least 30 minutes on Saturday, they might have a chance to cover the spread. 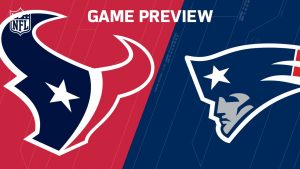 Sorry, I really wanted to give Texans a way out of this but there is simply no way I can phantom it in my mind.

My prediction is Patriots win and cover, as for the total, I don’t think Houston is going to get on the board much so I like that under.