Ace Sportsbook
»  Sporting Journal  »  Football  »
Down to the Wire – Packers vs. Lions

Week 17 is the time of reckoning for both the Green Bay Packers and the Detroit Lions, as whoever wins this rivalry game will be crowned as the NFC North divisional winner, ensuring a spot into the playoff season.

What you should consider when betting Packers vs. Lions

Both franchises are tied 9-6 for lead position, after the Lions lost to the Dallas Cowboys on Monday Night’s game. This means it is win, tie or go home time for one of these teams. With so much at stake, this game, has turned into the must watch game of the week and it will most likely be one of the most intense games of the season. No wonder the game was flexed to the prime-time slot. The match is now set to kickoff at 8:30 pm ET, and will be played at Ford Field in, Detroit, MI.

The NFC has given us some of the most competitive games this season, point in case, everything is more than settled as far as the post-season seats are concerned in the AFC, by contrast there are still a lot of scenarios to be played out in the NFC.  The only way both the Packers and the Lions make it into the playoffs this season is if Washington loses to the New York Giants which is unlikely it is expected that a lot of Giants’ key players will be held back in that game.

If Washington wins, however, the only way these two rivals move on to the post-season is if this game ends in a tie, and boy would that make a great story! A tie is an unlikely scenario, but, let us not forget that there were two this season alone, not to mention that over the years, there have been 7 ties in games played between these two teams. Having said that, do not expect this to end in a tie, there is simply too much at stake here, and neither team will go down without a fight.

The Lions are 6-1 at home, while the Packers are 3-4 on the road. Even though the Detroit Lions are so good while playing at Ford Field this season, they have yet to win by a large margin, in fact the only team the Lions beat by a margin greater than 3 points this season was the Jacksonville Jaguars.

Because the Packers have been the hottest team in the League in the last 5 weeks of the season, they opened as 3 point favorites at www.AceSportsbook.com, despite the amazing home record of the Lions. Aaron Rodgers, has proven to be one of the greatest quarterbacks in the history of the NFL; not only has he been the main contributor in the 5-game winning streak, but he has thrown 1367 yards, for 11 touchdowns and no interceptions. 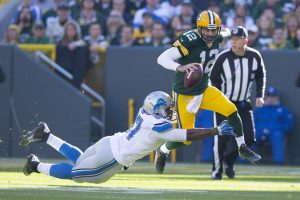 The Lions offense is averaging 21.47 points per game, but the Packers now have the number 5 rated front 7 defense when it comes to stopping the run, which will make life very complicated for Detroit on Sunday.

It is a shame it had to come down to this game for these two amazing teams, they both deserve to be in the playoffs, but the way things are going this won’t be the case. I expect this game to be incredibly close, it will really come down to the last few minutes of play, but in the end I think the Packers experience and ability to perform under pressure will give them the winning ticket into the post-season.