The NFL season is winding down and the last few battles are taking shape as the wildcard race standings start to take shape.

The Miami Dolphins are in the fight as they managed to hold on to the 6th place in the AFC playoff race after beating the Jets last week. Matt Moore made his season debut on the road against the Jets, after Ryan Tannehill got injured. Unfortunately, because they were playing the Jets there were not a lot of insights to be had on how Moore can perform against a winning team.

The Buffalo Bills are a long shot in the wildcard race, but stranger things have happened this year, a win against the Dolphins would not guarantee them a playoff spot, but it would certainly hinder Miami’s chances of holding on the 6th seed spot in the AFC.

Buffalo ended their two-game losing streak last week after they beat the Browns 33-13, this is by no means a great achievement considering the Cleveland Browns are in the run for the worst NFL team ever, they have yet to win a game this season. Honestly, I wanted to write a piece on the odds of the Browns going 0-16 this year but the idea was shot down, anyone who bet the under wins for the season on the Browns is hoping the regular season ends fast so they can collect.

Getting back to the matter at hand, the Miami Dolphins have not won in Buffalo since 2011, this is of course of some concern to the franchise at this critical moment, but, the good news is the last time they won Matt Moore was under center for the Dolphins, yes, the same Matt Moore that will start on Saturday’s game. Obviously, things are not the same as they were 5 years ago, and it will be difficult to reproduce that result this time around.

The Dolphins, had a narrow win of 28-25 at home against the Bills in week 7; this is from a team who is 6-1 at home this season and they had Tannehill, their poor record against the Bills in Buffalo, coupled with their seemingly struggles when visiting New York teams will make winning this week difficult to say the least.

Offensively this game will match the No. 9 Ranked Bills who are achieving 25.57 points per game on average against the No. 15 Ranked Dolphins defense who are only allowing an average of 22.43 points per game, the Bills are much better at running the ball than with their passing game, they are only getting an average of 182.57 passing yards per game way below the 234.64 yards per game through the air that Miami is allowing. Therefore, you should expect to see the Bills running the ball in most if not all their plays.

Defensively, the Miami Dolphins are the league’s 13th ranked front 7 in terms of stopping the run, allowing an average of 104.4 yards per game while on the road, this opens a lot of doors for the Bills who are currently the number 1 team in terms of generating rushing yards at home. 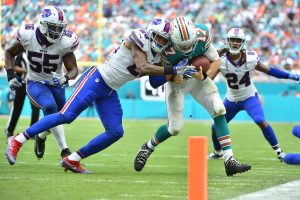 The pro football gambling line for this game as per Ace Sportsbook is Buffalo -3.5, I know there is a lot at stake for Miami in this game, but I can’t find a way to side with them this week. My pick is Buffalo laying the points.