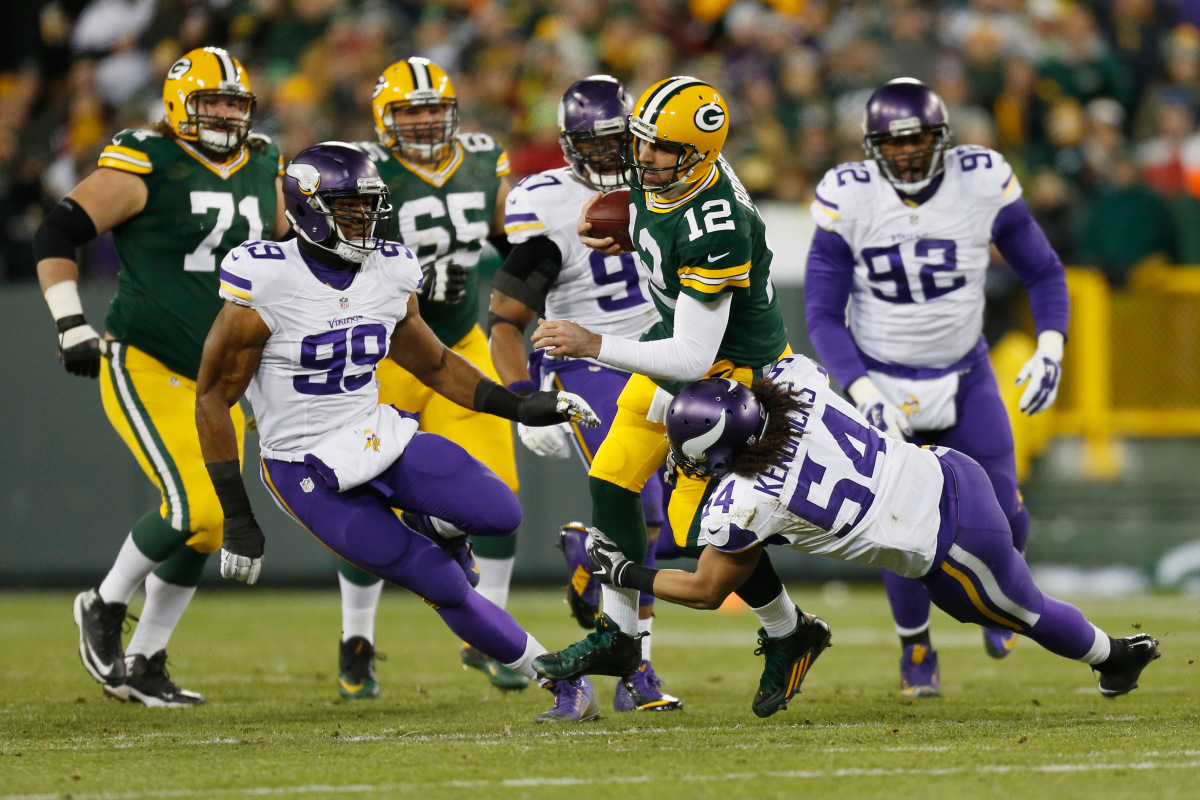 Saturday’s game between the Minnesota Vikings and the Green Bay Packers could have major implications in the NFC Wildcard Race. The Packers who through sheer force of will have become serious Wildcard contenders currently holding the 6th spot for the playoff run.

The Packers won their fourth straight game last week after narrowly defeating the Chicago Bears on the road. They are now8-6, putting them 1 game behind the division leaders Detroit Lions who are currently 9-5. These two rivals will face each other in week 17 to possibly decide who the winner of the NFC North will be.  The Packers have a head to head lead on the Lions and could end up winning the division even if Detroit manages to win against the Dallas Cowboys this week.

Fellow division rival, the Minnesota Vikings are 7-7, could potentially spoil the Packers winning streak and their dreams of a post season start. And they may have a good chance of doing so if the Green Bay Packers defense performs as poorly as they did last week. The Packers defense gave up 17 points in the fourth quarter to quarterback Matt Barkley and the rest of the Bears offense. Green Bay was up 17 points going into the 4th quarter last Sunday, and then the defense fell apart, allowing the Bears to score 17 points to even out the game.

Aaron Rodgers, who had an up and down first half of the season, has found his way once again, it was because of him that the Packers, were able to win by a field goal. Faced with a 3rd and 11 late in the game, Rodgers came through with the most important play of the game, he was attempting a 20-yard minimum just to get to 1st down with a little leeway, instead he took his time, moved to the left and connected with wide receiver Jordy Nelson for a 60-yard gain, this turned out to be enough to setup the winning field goal of the game. Had it not been for Aaron Rodgers, the game would have gone into overtime and they might not have been able to win under those circumstances.

The Vikings had their own set of problems last week, when they seemed to have given up on life entirely, losing in an almost shut out 34-6 to the Indianapolis Colts. If they regain their will to live, this could turn out to be not just a divisional defining game, but a great game to watch as well.

Minnesota does not perform well at Lambeau Stadium, as they have gone 2-5 Against the Spread in their last 7 appearances in Green Bay. But they do have a fair chance of winning considering that the Vikings defense is ranked No.6 allowing 18.5 points per game on average, they must step up their game this week though, as the Packers offense is ranked No.7 averaging 25.93 points per game. The Packers serial game alone is averaging 256.86 passing yards per game, but the Vikings secondary is only allowing 205.64 passing yards per game.

The Green Bay Packers are listed as 6.5 point favorites at www.AceSportsbook.com, the way Aaron Rodgers has been playing and given the disappointing performance by the Vikings last week, it is tough not to bet on the Packers. I predict the Packers win 28-17.