As the holiday season approaches everyone can use a little extra cash; place your bets at AceSportsbook.com where betting online is simple and where you’ll find the best odds in the market.

Here are our NCAAF picks for Saturday, November 12:

South Carolina is currently 5-4 with three consecutive wins, they will go on the road to the Ben Hill Griffin Stadium, home of the Florida Gators that currently have 6 wins and 2 losses, their last loss was this past weekend when they loss to Arkansas 31-10.  The Gators are dealing with an injured Luke Del Rio, the starting quarterback has yet to be announced but it will either be Austin Appleby or Feleipe Franks. South Carolina wants their fourth consecutive win, Florida is looking to come back from last week’s loss. Gators’ defense is solid, but their offense is only averaging 29.43 points per game. South Carolina have an average offensive and defensive line. Odds have Florida playing at home as a favorite, the line is all over the place some online sportsbooks have it at -14 while others offer -11 while the total is 37.5.

The Bears are coming off a horrible 62-22 loss to TCU, and are currently 6-2, while the Sooners defeated Iowa State 34-24 and are 7-2 for the season. Bears are having problems off the field which could be reflecting in their performance with two back to back losses, their defense was terrible against TCU and they have been conceding an average of 25 points per game. The Sooners on the other hand has a strong offense but also has been having problems with their defense throughout the entire season, allowing an average of 31.6 points per game. Their main card is QB Baker Mayfield who has had a great season. Odds have the Sooners as a big favorite with a spread of -14.5 and a total of 80. With Baylor’s state of mind right now is tough to pick them even with a tempting +14.5 line.

Pick: Oklahoma and the under. 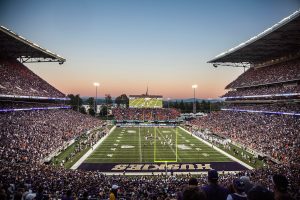 The undefeated Huskies will host the Trojans who are currently 6-3. USC had no problems last week dominating Oregon 45-20, while Washington scored 66-27 over California. USC has an inspired QB in Sam Darnold, who certainly is doing what he needs to do to get noticed alongside running back Ronald Jones II who had an important role in the win over Oregon last week. Huskies have a solid team in all fronts, defensively, offensively and in terms of special teams, they are simply better than USC; quarterback Jake Browning has had a great season alongside John Ross, Dante Pettis, Lavon Coleman; their only downside right now is not having linebacker Joe Mathis who is out due to a foot injury.  Point spread is at -8 for Washington with a total of 63. This is going to be a difficult game for the Huskies, who will certainly do everything possible to defend their undefeated record. USC Trojans are motivated and overall are a good team. Washington even without Mathis has a solid team and should be able to cover.

Pick: Washington and the over.