The Return of Brady – Patriots @ Browns

I have a feeling the gods don’t really care for the Cleveland Browns, not only are they 0-4 and easily the worst team in the league, they are going up against the New England Patriots, who are on a mission to redeem themselves after being shut-out by the Bills at home last week, and to top it all off Tom Brady returns to the field, and he has something to prove after a 4 game suspension over the “Deflategate” scandal last season.

The Patriots have more than proven they are a force to be reckoned with, even without Brady, they have a rising star in Jimmy Garoppolo who unfortunately was sidelined due to an injury, and Jacoby Brissett held his own in his first game, but was unable to replicate in his second start.

It is a completely different story for the Browns, they are the only team in the league yet to win a game this season. That is not say they have not put up their best effort; in their game against the Baltimore Ravens they had a 20-0 lead but crumbled and allowed the Ravens to score 25 unanswered points and lost the game 25-20.

In their match against the Dolphins in week 3, they had numerous opportunities, but again the gods decided to have some fun and kicker Cody Parkey missed three field goals including what might have been the game winner. The game went to OT where Miami scored the winning touchdown and Cleaveland lost 30-24.

And in week 4, the Browns had a 20-17 lead against the Redskins going into the 4th quarter, once again they were unable to hold on to the lead and allowed Washington to score two touchdowns in the 4th quarter which lead to a loss of 31-20.

Bottom line is, unless the gods have a change of heart and decide to let the Browns win their first game, against the Patriots none the less which would send ripples across the Universe, they will lose this game. The question now is; how can you maximize your winnings on this football gambling game.

Patriots are a 10-point favorite, take them straight up, Brady is not a happy camper right now feeling he was unjustly punished so he will bring his A game even if it’s against the worst team in the league.

If you are interested in football props, head on over to www.AceSportsbook.com and check the insane number of props offered in NFL.

Here are some of my prop bet predictions: 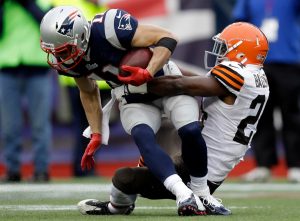