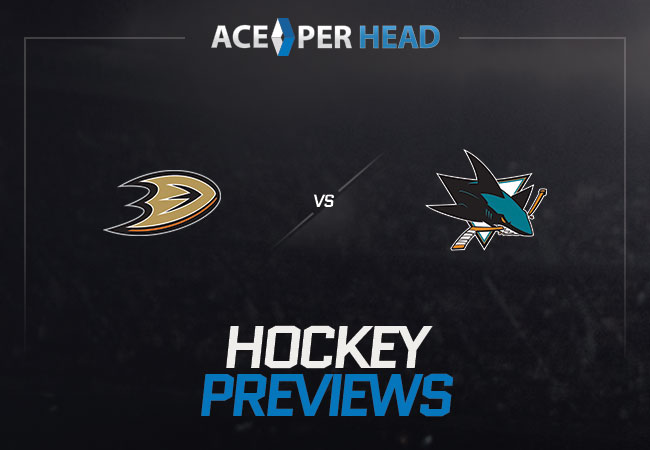 This Tuesday the San Jose Sharks host the Anaheim Ducks for some NHL action.

This season the San Jose Sharks have amassed 100 goals, thirty-eight points, and have a total points percentage of .514. the Sharks have let up 120 goals from the opposition, and twenty-four of them were when they were playing a man down. The sharks have put up eighteen goals while on the power-play, which is the twenty-fifth best in pro hockey. The Sharks have amassed 101 power-play opportunities for a power-play percentage of eighteen percent, then San Jose has taken 1,106 shots, and let their opponents shoot 1,189 shots. They have given up 123 power-play chances to their opponents, and have a penalty kill percentage of eighty percent. The last time the San Jose Sharks took the ice they faced off against the Los Angeles Kings. The Sharks won by the score of three to two and converted on one out of their two power-play opportunities. San Jose took twenty-three shots on the net and was able to connect on three goals. The Corsi percentage for San Jose was forty-six percent, this shows that the Sharks had an average performance on the ice. In net for the San Jose Sharks is Martin Jones, he has a professional record of 185 wins, 126 losses, and twenty-seven draws in a total of 351 career games. Jones has started in 344 games, and of those starts, 183 of them have been good for a quality start percentage of fifty-three percent. In his career, he has amassed 8,656 stops facing 9,520 shots. Jones has let in 864 goals total in his career and is letting in an average of two goals per game. He also has a save percentage of .909 and has been on the ice for a total of 20,175 minutes. How To Win At Bookie For Dummies.

The challengers of the Anaheim Ducks have collected 111 power-play chances which is the eighteenth best in pro hockey, and on those tries, they have converted twenty-six goals. The Ducks have faced 1,174 shots, and own a save percentage of .89, while Anaheim has taken 1,052 shots. The Ducks have let in a total of 128 goals, while they have amassed eighty-six goals which are the thirtieth best in professional Ice Hockey. The Ducks have been on the power-play eighty-six times, and nine goals have found the back of the neck in those opportunities. This season Anaheim owns a points percentage of .372 and have amassed twenty-nine points. The Ducks took a tough loss their last time out on the ice to the Arizona Coyotes by the score of three – two. The Corsi percentage for the Anaheim Ducks was thirty-eight percent, and the Fenwick is at forty-one percent. This showed that the Ducks had an underwhelming offensive effort on the ice. Anaheim had to serve a total of nine minutes in the penalty box, and when they were on their only power play they weren’t able to find the back of the net. The Advantages Of Using Bookmaking Guidelines.

Lastly, they won twenty-one face-offs and scored twice on their twenty shots on the net. The man in between the pipes for the Anaheim Ducks is John Gibson, in his professional hickey career he has amassed a record of 146 wins, 115 losses, and thirty-nine draws in his 312 total games played. Gibson has started in 304 games and of those starts, 169 of them have been good. In his 17,812 minutes on the ice, he has seen 9,156 shots against him and has stopped 8,393 of those shots. Gibson has a save percentage of .917 and is giving up an average of two goals per game for a total of 763 goals allowed. How to Make Money Online With Bookmaking Guidelines.

The Sharks are looking like the better team on paper in this match and they just came off a victory, but the Anaheim Ducks are going into this one ready to bounce back. At www.AcePerHead.com our pick to win this game against the spread is going to the Anaheim Ducks.