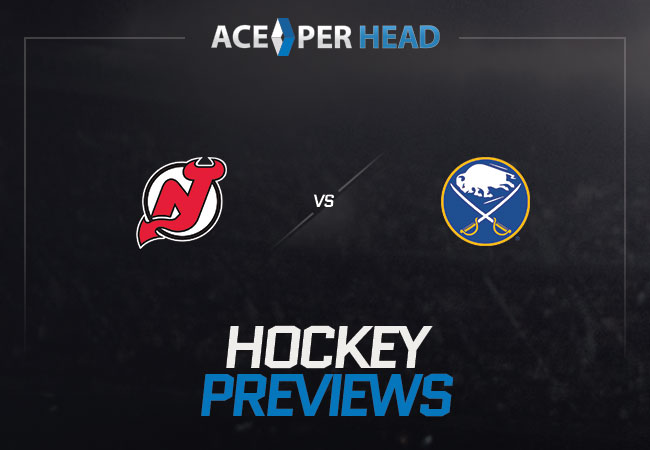 The New Jersey Devils are set to host the Buffalo Sabres for some Tuesday night NHL action.

The New Jersey Devils are going into this matchup with a record of eight wins, thirteen losses, and three draws, the Devils have scored sixty goals so far this season and eight of those were scored on the power play, which is one of the worst stats in professional hockey (30th). The Devils have taken 708 shots on net while facing 741 so far this season. New Jersey has earned sixty-nine power-play chances and has given away seventy-four opportunities. This Devils team has let in twenty-three goals while playing a man down for a penalty kill percentage of sixty-nine percent. So far this season the Devils have allowed seventy-seven goals in total from the opposition, and have nineteen points so far this season. The last time P.K. Subban and the New Jersey Devils took the ice they battled against the New York Islanders and the Devils went home losing 3-2. Bookmaker service online.

The Devils had three power-play chances and they were only able to convert on one of those opportunities. In this outing, the Devils scored two goals out of thirty-one shots on net. The Corsi rate for this matchup was forty-six percent, and a Fenwick rate of forty-five percent. This shows New Jersey has seen better days on the ice, and this was a close one overall. In net for the New Jersey Devils is Mackenzie Blackwood who has made 2,327 saves, and he has faced 2,549 shots against. Blackwood has a save percentage of .913, and he is going into this matchup with a professional record of thirty-seven wins, thirty-two losses, and nine draws for a total of eighty-four games and 4,774 minutes on the ice. Blackwood has been a starter in seventy-eight of his games and has had a good start in forty-three of those games, which is over fifty percent success rate. While in net he has only let in 222 goals and is letting in an average of three goals per game. HOW TO CHOOSE A BOOKIE SERVICE.

The Buffalo Sabres are going into this game with a record of six wins, sixteen losses, and three draws which is quite underwhelming. The Buffalo Sabres have scored fifty-six goals this season which is 31st in the NHL, and they have given up eighty-six to the opposition so far this season. So far the Sabres have amassed sixteen points, also they have been in seventy power play opportunities and have converted nineteen goals for a conversion rate of twenty-seven percent. While their opponents have been on the power play fifty-nine times which is the worst in the NHL, also they have let in twelve goals while playing a man down. Jack Eichel l and the Buffalo Sabres have given up 74 goals, facing 804 shots for a save percentage of .893, while they have taken 728 shots. In their last time out the Sabres took a tough 3-0 loss to the Penguins. At the face-off circle, they won twenty face-offs and lost twenty-five times trying to possess the puck. The Corsi rate for the Sabres in this game was forty-nine percent, and the Fenwick came in at forty-eight percent for Buffalo. They only had to serve four minutes in the penalty box, and while they were on the power play twice they were unable to convert. This Buffalo team had a weak showing in their last game, they put twenty-four shots on net and weren’t able to find the back of the net at all. Overall these teams are scrappy and are both in the same position trying to revive their season.

At Ace Pay Per Head our pick to win this game against the spread is going to the Buffalo Sabres. This game should definitely be an exciting one and if you’re looking to get in on the action, with the introduction of a greater variety of hockey prop bets, alternative lines, and live betting. Ace Per Head is your place with the sharpest line in the business it makes NHL betting a breeze. Bookies Services.