AceSportsbook
»  Sporting Journal  »
NFC vs AFC: Which One Should You Bet On?

NFC vs AFC: Which One Should You Bet On? 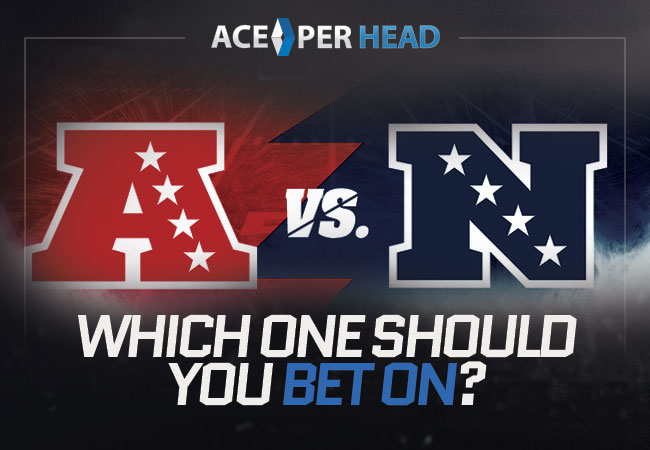 The Super Bowl is America’s Game, and it is one of the most popular sporting events of the year to bet on.

For Super Bowl LV, there was about $500 million legally bet on the game. That is not even the highest amount ever recorded, which belongs to Super Bowl LII with a $158 million bet on that game.

All of this does not even factor in the number of future bets on the Super Bowl winner throughout the year. As a football bettor, you probably ask yourself who to pick between the NFC vs. AFC representative team regularly.

How do you decide who to bet? This is your guide.

One way that you can do this is to look at past records in the Super Bowl. This is a list of every Super Bowl champion in the last 55 years.

In the all-time series, the NFC barely edges out the AFC with a 28-27 record in the Super Bowl.

However, if you look at the record in recent years, the edge goes towards the AFC significantly. Granted, six of those Super Bowls were won in the last 20 years when Tom Brady was still on the New England Patriots. Nevertheless, the record for those games in the last 20 Super Bowls has been 12-8 in favor of the AFC.

If you need even more recent history, then let’s look at the last seven years. In those Super Bowls, the AFC has had the edge 5-2. Admittedly, three of those were by Tom Brady and the Patriots if that matters to some of you.

Can you tell a lot from this alone? Honestly, not really; besides the fact that AFC has seen a nice resurgence but that can change. But, it cannot hurt to take a look at who has done well in the Super Bowl over the years.

The next thing that you need to take a look at as a bettor is team trends. What is an individual team’s record on the season? What are their odds to win the Super Bowl?

One thing that can help you narrow this down, even more, is to look at every team’s record against the spread for that season. For example, in 2021, the Dallas Cowboys won their first seven games against the spread.

That means that whether they were a touchdown underdog or a touchdown favorite, they won you a bet if you were backing that team in a game.

This type of system allows you to look past a team’s overall record and talent and start to look at how well they are perceived to be by the sportsbooks and by the gambling market.

For example, the Kansas City Chiefs came into the 2021 season with very high expectations because they made the Super Bowl the year prior and they have one of the best quarterbacks in the NFL in Patrick Mahomes.

The same system can be applied for team trends if you wish to back an over or under-point total in a game because you can figure out how many points per game a team averages and look at which side of the point total games with that team tend to lean towards.

As a bettor, the next thing that you can do is figure out the AFC vs. NFC record for non-conference games. In the 2021 season, the NFL has done something new by adding a 17th game to the schedule this year.

That 17th game is going to be a fifth non-conference game when there are normally only four of those games per season.

For example, eight weeks through the 2021 season, the record between the AFC vs. NFC in 2021 is 21-16 in favor of the NFC. You can argue that the NFC is either better as a whole in that situation or that the conference has more elite teams at the top.

There are about 43 more non-conference games to go with the information above, so one thing that you can do is start looking at those matchups and seeing how many of those top teams in the NFC are going to be in.

In this situation, something to note would be that five of the best teams in the conference have three or more games left against the AFC this season. Combined, the Dallas Cowboys, Tampa Bay Bucs, Los Angeles Rams, New Orleans Saints, and the Green Bay Packers have a 9-0 record vs. the AFC respectively.

If you are going to bet based on conference record, that would have to be something of note for you and something that can potentially make you a few extra dollars later in the season if you still trust what appears to be some of the most talented teams in the conference.

Another way that you can figure out which conference to bet on is to look at the individual team odds. At the end of the day, two teams from the same conference can be worlds apart when it comes to the realistic chances of each winning the Super Bowl.

But, you have to remember that the team actually has to make the big game if they are coming from the tougher conference.

Let’s take a look at the current Super Bowl odds for Super Bowl LVI at the time of writing. Here, the current favorite is from the AFC, that being the Buffalo Bills at +500. Then, the five teams with the next best odds to win the Super Bowl ALL come from the NFC.

It makes sense that overall, a team from the NFC has -130 odds to win the Super Bowl vs. +110 from the AFC but it does not mean that a talented AFC team cannot win the game. Some may argue that because the Bills look like they have an easier path compared to anybody in the NFC, they would be the better team to place your bet on.

So, the team odds let you narrow it down rather than having to look at the whole conference but it will also give you an idea of how tough the competition in the conference might be.

Finally, when it comes to picking whether to bet on an AFC or an NFC team, sometimes you just need to figure out which team offers you the better situation. You do not always have to bet the Super Bowl winner and instead, you can just bet a team that you think has a better chance at winning the game in front of them.

In the example above, the Bills are much bigger favorites to come out of the AFC than any team is in the NFC. If you think that the Bills are much better than everyone else in their conference but you are not as sure about them winning the Super Bowl, then just bet the Bills to win the AFC Championship.

With this situation, you would get the Bills at +180 odds and still make a good profit if they end up winning the conference championship.

Then, there is betting on the individual game itself, like if the Bills end up matching up against a team that you are very confident that they will beat, compared to the NFC Championship that might end up being more of a toss-up.

You need to take a closer look at the exact lines and the exact odds that you find each of these conferences in and decide which one stands out for your own betting interests.

Are you more confident that the Bills will come out of the AFC or that an NFC team will win the Super Bowl? These are the types of questions that you have to ask yourself to find the best bet for you.

When it comes to NFC vs. AFC bets, it depends on what the exact situation you are facing is. But, if you follow team odds, team trends, conference records, and history in the big game, you should have a better idea of which direction that you need to go in betting.

Do you think you have a betting strategy down, or do you think that it is better to be on the bookie side of the sportsbook? Learn about creating your own sportsbook here.