The WNBA Playoffs are ready to kick off this Wednesday September 21st, and there are some major changes in format.

This year the top eight teams will face each other in the playoffs, but this year the matches are based on the team’s ranking and not the conference to which they belong.

This is the new modality for the playoffs:

Let’s take a look at the matchups for round one of the WNBA Playoffs: 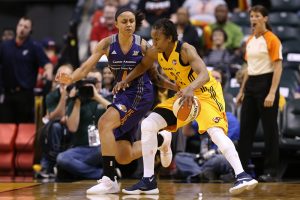 The Phoenix Mercury franchise has won 3 WNBA Championships including the 2009 Championship where they defeated the Fever. The game is scheduled to start at 6pm ET at Bankers Life Fieldhouse in Indianapolis, and will be broadcasted by ESPNNews. These two teams played each other twice this season splitting the wins, but historically Phoenix has the upper hand against Indiana with a 3-2 record. However, this time around, the Fever are home and this will be the last season of star player Tamika Catchings who is set to go out with a bang after scoring 16 points and 7 rebounds in the final game against the Stars.

Prediction: Indiana Fever moves on to the second round.

The second game of the first round will also be held on Wednesday, this one being held at McCamish Pavilion on the campus of Georgia Tech starting at 8pm ET also televised by ESPNNews. The Dream and Storm have played against each other a total of three times during the 2016 season, where Seattle leads 2-1, Atlanta won one game at home and lost another, and was then defeated at Seattle. So the normal advantage of home court is not necessarily a defining factor in this match up.

Prediction: Seattle Storm moves on the next round.

For a complete list of WNBA Playoff odds, props and more, visit www.AceSportsbook.com.