Ace Sportsbook
»  Sporting Journal  »  Football  »
Against the Spread in Week 15? Buccaneers vs. Cowboys

There are only 3 more weeks left in the NFL regular season, and the last playoffs spots are filling in quickly. The Tampa Bay Buccaneers have not been part of a prime-time game in some time, but this Sunday they will be under the limelight as they travel to AT&T Stadium in Dallas to face the Cowboys.

This game was originally scheduled to be played at 4:25 pm ET on Sunday, but after the Buccaneers rallied back from the gutter and won five games in a row, the powers that be in the NFL decided this game would draw a bigger audience than the Patriots vs. Broncos. Makes you wonder if this hurt Brady’s feelings…

I for one agree with the NFL officials, this game has taken a different direction altogether, on the one hand we have Tampa Bay who has become a legitimate contender for a wildcard spot and then we have America’s team, the Cowboys always draw a crowd even when they were in the slumps and now that they are a winning team even more so.

It will be intriguing to see how Dallas deals with their resent loss against the Giants after a record 11 straight wins. Dallas’ two season loss games came at the hand of the New York Giants, something that has to hurt, which raises the question, will they come back full force and steamroll the Buccaneers or will they drop their guard knowing they are already guaranteed a spot in the playoffs?

Dak Prescott has been great this year, Ezekiel Elliot has been out of this world and yet the team has struggled against the spread in the last 5 weeks, will this trend continue into week 15? Probably, but that doesn’t mean Dallas will lose the game.

The Buccaneers defense has risen to be one of the best in the NFC in the second half of the season, most notable is the improvement in their secondary, there is no doubt that they can contain Prescott but their offense is no match for the Cowboys defense. Games between these two teams normally go under, in fact, of the last 11 matches played between them, 9 have gone under. The improvement in the Bucs defense signals that the trend will continue.

Tampa Bay’s record against the Cowboys is not good news, they are 1-5 straight up wins in their last 6 encounters. If we just look at the rankings it would seem this trend will also continue, consider this, the Cowboys offense is ranked #6 in the league with an average of 26.15 points per game, while the Buccaneers are ranked #16 with an average of 22.77 points per game. The Buccaneers are allowing an average of 250.08 passing yards per game, the Cowboys are averaging 233.08 passing yards per game, way below what Tampa Bay is known to give away. Which means they are little to no threat to Dallas in that respect. 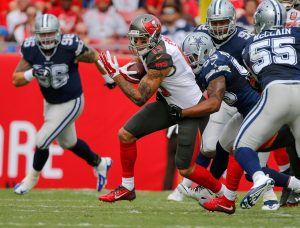 The latest pro football odds at AceSportsbook.com show the Cowboys as being 7 point favorites in this game while the total is 46. Seven points is a lot, and Dallas’ struggle against the spread in recent weeks makes this a somewhat scary bet, but I do believe Dallas will win the game, so if you have the budget bet them on the Money Line, otherwise take the Buccaneers at +7 and yes, bet the under.