Time flies when you are having fun; college football reaches its tenth week of action with Alabama, Clemson and Michigan holding tight to the first three positions of the ranking, all three teams are undefeated and planning to keep it that way for another week. Texas A&M, Washington and Ohio State hold the fourth, fifth and sixth position respectively.

As usual we leave you an overview to some of the most look-forward games this week. Place your bets on college football matches at AceSportsbook.com and add excitement to the games. Request your bonuses, place your bets online from the comfort of your own home and enjoy Live Betting on College Football.

Nebaska is 7-1 and ranked 10 while Ohio State is in the sixth place also with a 7-1 record. Cornhuskers took their first loss to Badgers last week 17-23, the loss didn’t come as a surprise as Nebraska had been struggling for several games, yet, they didn’t play a bad game, they fell in overtime. The problem Nebraska faces here is that Ohio State is better both offensively and defensively; the Buckeyes are averaging 42.6 points per game and Nebraska has been allowing in average 18.4 points per page.

Ohio State is a big favorite with a line of -17, while oddsmakers have the total at 52. Everything points to the fact that Ohio will win this game, but will they cover such a high line?

Pick: Nebraska plus the points and the Over on the game.

Badgers are 6-2, while the Wildcats are  4-4, Badgers are coming from two big wins, a very significant one over Nebraska last week and the week before that over Iowa. The two losses they had came against tough teams, Michigan and Ohio State. Badgers have an OK offense and a strong defense. Northwestern’s current ranking and results may not speak highly of them, but they have been up against tough teams, they faced off against Ohio State last week, played a good game and lost 24-20; they are playing at home, but they will need to improve their defensive work if they want to stand a chance against Badgers.

Wisconsin are the favorites to win with a line of –7  the total line is of 41.

Pick: Expect an exciting and competitive game, Wisconsin will win the game and cover the spread. 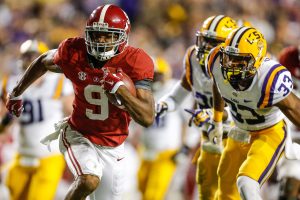 We can’t leave Alabama out of the list of course, because they remain undefeated and they are the team to beat… will LSU manage to beat them?

Doubtful, Alabama is too much to handle, they have won 7 of their games by at least 19 points; LSU is not to be taken lightly and they have been doing better and better in their last games, the line reflects this, with a modest  –8 for Alabama, total 45.

Pick: Alabama to win and the over.

Get the best odds for college football at Ace Sportsbook.