Another week of great college football games, and we bring you some of the must watch, must bet, games:

A key Big 12 matchup between Wildcats and Sooners on Saturday, October 15, both teams have three wins two losses in the season. Oklahoma has won three of their last four games, they are playing at home, their offense is strong and they have a good quarterback, their defense however is their weak point; meanwhile, the Wildcats have a solid defense but a weak attack. NCAAF Line has Oklahoma -10, some books have that line at -13, while the Total is 62.5.

Pick: Oklahoma -10 (if it’s anything over that take Kansas) and under

NC Wolfpack comes from a 10-3 win over Notre Dame. QB Ryan Finley has been doing a great job this season and together with running back Matthew Dayes North Carolina has managed to have a good season with 4 wins and only 1 loss. Offensively they are solid, scoring in average 34 points per game, defensively they are O.K. a well-rounded team that is sure to give the Tigers a heck of a game.

Clemson is undefeated, last week they beat Boston College 56-10, Tigers are one of the top teams to beat, and a tough one, their defense is only giving in average 15 points per game, their quarterback Deshaun Watson has a lot to do with their outstanding stats, offensively they successful and difficult to contain.

As expected, oddsmakers have Clemson Tigers as the favorites -17 and the over/under 56.

Pick:  Although both teams are solid, the Tigers are just better in all fronts, there is no doubt Clemson is going to win, the question is whether they will be able to cover, I’ll take the risk with Clemson and the under, and I may get a teaser with Clemson and Oklahoma at Ace Sportsbook. 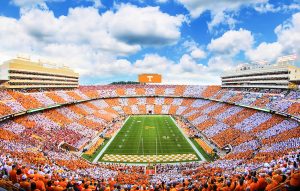 A highly expected matchup, Alabama is undefeated and the Volunteers lost their first game last week against Texas A&M 45-38, if you were lucky to bet this game with the opening line of -8 you should feel more than confident with that bet. The line currently stands at -12 for Crimson Tide. Tennessee has not beaten Alabama since 2006. We went over this last week, Crimson Tide continues to outrush its opponents, talent in every line, they are just a difficult team to beat. We also talked about the Volunteers, they are simply inconsistent they don’t have a clear strategy and this was evident against Texas A&M, they have good moments, sometimes the offense is tight and other times the defense runs well… but there’s something missing, something that brings them together. Volunteers should be motivated playing at home and coming from a loss. They put themselves in a tough spot with their loss last week.

Pick: Alabama wins… do they cover? I believe so, for the total I like the Under 58

Pick: Ohio State and the Over

Wake Forest is 5-1 and Florida State 4-2.  Seminoles are playing at home. Wake Forest has a good defense while Florida has a strong offense. Spread places Florida as the favorite at -21, total 53

Pick:  Florida will likely win but won’t cover the spread, I’d go with Wake Forest +21 and Over.

Make your College Football bets at AceSportsbook.com and remember to get information on bonuses and promotions.